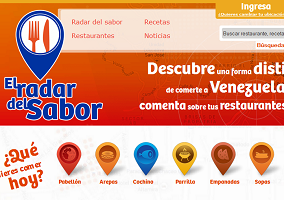 Coca Cola, through its Frescolita brand of cream soda, has expanded its social media presence in Venezuela through the launch of a digital platform related to traditional Venezuelan food.

According to Confirmado, the new platform, which is called “El Radar del Sabor” (“The Flavour Radar”) will help users find, recommend, rate and share the best places to eat traditional foods, as well as allowing also them to share recipes and tips about how to prepare Venezuelan dishses.

Accessing the platform through a smartphone or tablet, consumers can identify the nearest location selling specialities such as arepas, empanadas or desserts.

Daniela Febres-Cordero, manager of the Frescolita brand, said: "We want to be the place that brings together all of our country’s culinary efforts and to be the focal point for the best Venezuelan cuisine, both for those who live here and for visitiors".

According to the company, the initial focus for the platform will be the cities of Caracas, La Guaira, Maracay and Valencia, with a nationwide rollout planned for a future date.