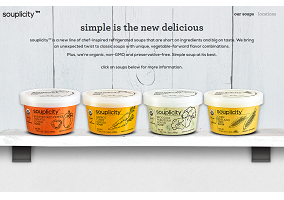 In a further push into the chilled sector, consumer goods firm Campbell Soup has debuted a new soup line called Souplicity via its C-Fresh division.

New to the US, the high pressure processed line is claimed to be made with simple, organic ingredients and to be free from GMO and preservatives. The launch is described as being in response to increased demand for organic and vegetable-based foods, and forms part of a previously announced strategy focused on “breakthrough innovation”. Earlier in the year, Campbell Soup expanded its chilled soup offering with a new line under the Garden Fresh Gourmet brand.

Commenting on Souplicity, C-Fresh general manager Todd Putman said: "While more than half of consumers are looking for foods that are both organic and made with simple, recognizable ingredients, there has been minimal innovation in the fresh-refrigerated soup category to meet these demands. With souplicity, we’re bringing bold flavors and variety to consumers who crave a fresh culinary twist on a classic".

Marketed as "a new line of chef-inspired refrigerated soups that are short on ingredients and big on taste, Souplicity Chilled Soup is available in the varieties Roasted Red Pepper Tomato Gouda (“vibrant flavours” with “a decadent finish”), Carrot Curry Ginger (“an intensely rich flavour” with “a bright finish”); Broccoli Parmesan Lemon (delivering “an epicurean upgrade” with a hint of “refreshing” lemon flavour and “subtle hints of black pepper and thyme”), and Corn Poblano Lime with a “robust flavour”.