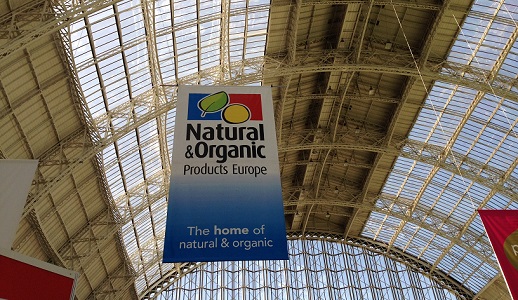 The 18th edition of Natural & Organic Products Europe took place this week at Kensington Olympia in London. The show represents a broad cross-section of natural and ethical consumer goods companies and the 2014 event, promoted as “the biggest to date”, attracted over 650 exhibitors from around the world and many thousands of visitors.

A recent report from the Soil Association, referenced by Natural & Organic Products Europe, also bore witness to renewed strength in the natural and organics sector. The 2014 study showed that UK organic products had recently seen sales climb by 2.8%, reaching a total value of £1.79 billion. This is the first growth the UK organics sector has reported in over five years, having been hit hard by the recession and a return to price-conscious consumer buying behaviour. As further evidence for growth in the sector, the Natural & Organic Products Europe show itself will decamp to a new and larger home at the ExCel exhibition centre in London’s Docklands for the 2015 edition.

In order to cater to the needs of the many categories that touch on the “natural and organic” theme, the show was once divided into  four discrete areas: The Natural Food Show, Natural Beauty & Spa, Natural Health, and Natural Living. New for 2014 were dedicated sections for companies from Russia and Sicily, as well as the Soil Association Organic Food Chiller and the Eco Luce Beauty pavilion.

Given the diversity of companies exhibiting, innovation at the show proved varied. In the household goods sector, one company was showcasing a “food” based natural cleaner containing ingredients such as soya, yeast, yoghurt and molasses, while in personal care one of the more notable launches was a baby care range claimed to be the first to be based on superfruits. In non-alcoholic beverages, meanwhile, beauty drinks continued to show their hand, including a pomegranate-flaoured water enriched with collagen and vitamin C.

Read more about Natural & Organic Products Europe 2014 in the May edition of Gama News.