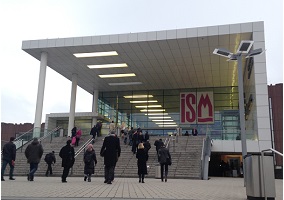 The first four days of February saw the annual arrival of ISM (Internationale Süßwarenmesse), the leading trade show for the confectionery, cake and biscuit sectors, at the showgrounds of Koelnmesse in Cologne, Germany.

Returning for its 44th edition in 2015, the show promised “sweets as always” but also “more snacks than ever before”, an acknowledgment of the growth of the ‘snacking’ phenomenon as an overarching trend across many food categories and, according to the show, reflecting “changes in consumer needs [that] lead to new nutritional trends”. Among the 1,500 exhibitors, alongside businesses from the show’s core sectors of confectionery and bakery, were companies in newly evolving areas including on-the-go foods and breakfast snacks, as well as producers of tea, coffee and gourmet products.

The increasing prominence of snack foods was evinced not only through the broader exhibitor profile but also the adaptation and evolution of product lines, from new ‘mini’ formats and portion packs through to ongoing innovation in ‘snack meals’, especially on-the-go cereals and drinks designed to replace breakfast foods.

In snacks, as well as in confectionery, messages of power and masculinity were also in abundance, with companies seemingly keener than ever to cater more directly for a male audience. From functional enhancement, especially through protein, to emphasis on bold or ‘extreme’ product experiences, these products were especially noticeable for their almost universal use of high-impact black packaging, highlighting efforts now being made to establish clearly differentiated product lines for the male market.

Meanwhile, the seemingly inexorable growth of the ‘free from’ segment was once again much in evidence. A number of companies noted that a growing health awareness, especially in relation to sugar levels, was setting the tone for much product innovation.

In category terms, chocolate spreads and nut butters were a notable feature on many exhibitor stands, with a number of companies diversifying from conventional confectionery categories in an attempt to tap into growth opportunities in the sweet spreads market.

Read more about ISM in the next issue of Gama News.