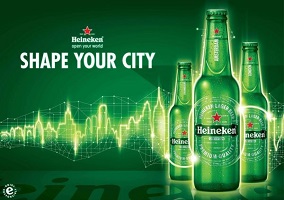 Dutch beer maker Heineken has announced the launch of a new global campaign called Shape Your City that “aims to broaden the imagination of and ignite creative ideas in the new generation of people living in urban cities”.

According to an article in Thai PR, the campaign will be launched together with a new 320ml 'sleek' can priced around 44 THB ($1.25) that is said to be the first in the Thai beer market.

Following on from the Open Your City campaign launched in 2014, Shape Your City “represents our commitment to continue our global campaign”, commented Pattapanee Ekahitanond, Heineken Marketing Manager at TAP Group, Heineken's distributor in Thailand.

“This is a more sophisticated, new vision that encourages Thais to break free from stereotypes to embrace new experiences, and find inspiration in their own cities, no matter where they live", she added.

Shape Your City is being debuted in Thailand before rolled out globally.