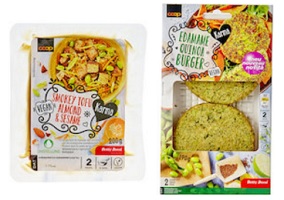 Coop, the leading Swiss grocery retailer, is set to launch a new retail outlet offering vegetarian friendly products, according to a report in 20 Minuten.

Specific details of the new concept are said to remain closely guarded, but 20 Minuten reports that the store is set to be named Karma and will focus on products that target vegetarians and flexitarians, much like the namesake private label line that Coop launched in 2013.

The new store, located in Zug railway station, comes only two years after the Swiss supermarket group launched Coop To Go, a chain of convenience-oriented stores typically sited in high footfall locations such as transport hubs.

Blick reports that the new Karma stores are set to be expanded across Switzerland and will feature products from the existing Karma line, as well as a take-away section selling fast food such as vegetable burgers.

20 Minuten notes that, according to a recent study, while only 2% of the Swiss describe themselves as vegetarians, as many as 40% identify as flexitarian, meaning they reduce their meat consumption or consciously abstain from eating meat from time to time.