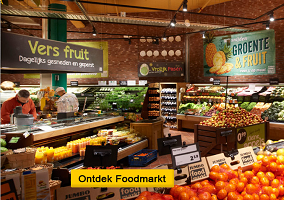 Dutch retail chain Jumbo has announced plans to open up to 10 of its new-concept 'Foodmarkt' (food market') supermarkets in the next three to five years, according to a report in Levensmiddelenkrant.

The announcement comes shortly after the opening of the retailer's second 'food market' store, located in Amsterdam North. According to reports, the company now plans to open two to three of the stores annually over the next few years.

Jumbo's 'food market' concept was first established at a store in Breda in 2013.  6,000 square metres in size, it focuses especially on  produce such as fruit, vegetables, bakery, meat, fish and other fresh groceries. The 'market' effect is achieved through rustic styling, including brickwork walls, and numerous counters offering various kinds of fresh produce. Stores also feature kitchens dispensing freshly-prepared meals for consumption on the premises or at home, as well as providing recipe tips based on fresh ingredients.

While the original Breda store is yet to turn a profit due to its initial high capital expenditure, operating cash flow is positive and the company expects to recoup its investment within a matter of years, CFO Ton van Veen commented.