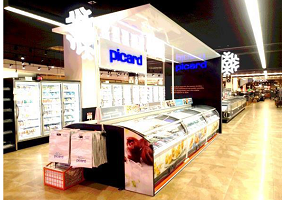 French frozen food supplier Picard has secured a tie up with Japanese retailer Aeon to stock popular items from its range in Aeon stores.

A newly opened Aeon supermarket in the city of Hino is the first to stock the new Picard range. A special section is given over to around 50 Picard items including appetizers and main meals, priced between 600 yen ($5) and 2000 yen ($17).

Aeon said it planned to roll out the Picard range to a further 9 stores in Tokyo and the surrounding area by the end of 2014. The firm and its partner will test the range's popularity and will then open Picard’s first dedicated store in Tokyo in 2016 before planning further store roll-outs.

The tie-up with Picard will bring “France’s accomplished new food culture” to Aeon’s stores, the company said, adding that it saw increased demand for frozen ready meals as a result of higher numbers of senior citizens and busy working women in Japan. The Japanese retail giant already offers a number of frozen ranges but said that Picard products would be sold as a premium offering.