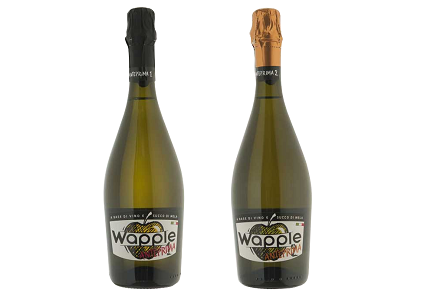 This week, Gama turns its attention to Wapple Anteprima Wine-Based Drink – a cider-meets-wine hybrid looking to establish a new segment within the alcoholic drinks industry.

Purportedly several years in the making, and only recently unveiled in Italy, Wapple is a new grape and apple ‘wine’ promoted as a “new dimension” in alcoholic aperitifs. The 8% abv drink – coined from the words “wine” and “apple” – has been developed by Consorzio Ortofrutticolo di Belfiore, a fruitgrowers’ cooperative from the north of Italy, and is made uniquely from fruit produced in the Veneto region. Adamant that it is neither cider nor wine – “simply Wapple” – it comes in two versions: one with greater acidity, showcasing the use of Garganega grapes, and one that is fruitier, with a more pronounced apple flavour. Ultimately, the two fruits receive roughly equal billing, with grapes making up 51% of the recipe and apples the majority of the rest.

Despite the focus on Italian produce, Wapple is in some ways an unlikely launch for a country not widely accustomed to apple-based alcoholic drinks. According to information published by Companies and Markets, the first mainstream cider brand in Italy – Strongbow Gold – was launched only three years ago, and, despite an initial limited surge in popularity, there has been little evidence that cider has sufficiently caught the consumer imagination to prompt a boom comparable to that seen in other countries. Indeed, some industry sources predict that cider sales in Italy may already have reached a peak and could be set for a gradual decline over the coming years.

Faced with this difficulty, it is probably unsurprising that the makers of Wapple have opted to set their sights on northern European countries such as the UK. Here, where cider sales have soared, there is likely to be a ready market for a product of Wapple’s profile – a fruity, sparkling, low abv drink featuring an original combination of flavours.

This is not to say, however, that apple-based products could not succeed in a market such as Italy: it may simply be that an alternative marketing approach is required. One possibility would be to borrow from the traditional vocabulary of wine – highlighting the quality or origin of ingredients, production methods, fruit varieties or even growing conditions: Wapple, for instance, emphasises the use of “two unique natural ingredients” and boasts “organoleptic qualities” that reflect the product’s origins.

Such an approach may also be valid even where cider is successful, and where markets have begun to become saturated: for producers of cider, beer and even hybrid products such as Wapple, factors such as provenance, craft, and flavour complexity could be an increasingly important differentiator as brands seek to cement appeal among a significant niche of ‘connoisseurs’ within the alcoholic drinks space.