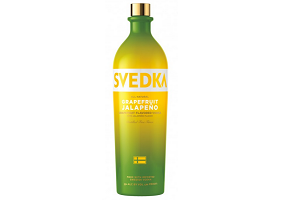 Further highlighting the growth of bold and challenging taste experiences in FMCG products, this week Gama shines a torch on the latest flavour to be added to the Svedka Swedish vodka line – Svedka Grapefruit Jalapeno Vodka.

Due to be launched in the US by Constellation Brands, Svedka Grapefruit Jalapeno Vodka is looking to appeal to consumers with adventurous palates “by pairing sweet and tart with hot and spicy”. Described as having a “proprietary grapefruit and jalapeno flavour”, the vodka “begins with a bright, citrus entry” before “building to a smooth hint of heat, and intensifying with a tart, juicy finish and jalapeno bite”, according to company literature.

Svedka Grapefruit Jalapeno Vodka also boasts “innovative packaging to match [its] vibrant flavor profile”. The design is certainly eye-catching, with a central band of bright ‘citrus’ yellow fading to a dark ‘chili’ green at the upper and lower extremities of the bottle. In this way the packaging is attempting to echo the profile of the flavour blend – a bold, even ‘clashing’ combination but one which is simultaneously dynamic, complex and unfolding.

Although apparently new in combination, Svedka Grapefruit Jalapeno Vodka’s feature flavours are ones that have seen increased pick-up among vodka brands over the last few years. Spicy heat has emerged in a number of new product launches, from Stolichnaya Hot and the sriracha-inspired UV vodka, to products focusing on the ‘challenge’ element of extreme chili, such as 100,000 Scovilles Naga Chili Vodka and Instant Regret Naga Chili Vodka. Grapefruit flavours, meanwhile, have also become popular among major brands, with recent launches including Absolut Ruby Red and Finlandia Grapefruit in 2006 and, just this year, a new Ruby Red Grapefruit variety of vodka under the Smirnoff brand in the US. According to Wirtz, the company promoting the Smirnoff launch, grapefruit flavours have seen 19% growth in the off-trade spirits market in recent times, while grapefruit has grown to become the 3rd largest growing flavour in the vodka category.

While vodka, and indeed other spirit categories, may be no stranger to experimental flavours – recent years have seen a whole host of new concepts, from dairy and cake-inspired combinations to a plethora of fruit and spice blends – Svedka Grapefruit Jalapeno Vodka is an indication of how boundaries continue to be pushed in the pursuit of flavour intensity. By exploring the breadth of the flavour spectrum – combining sweet, acid, bitter, spicy and even salty and savoury profiles – producers can look to meet consumer demand for heightened sensory experiences and complex, multi-dimensional flavour blends in all areas of the spirits market.