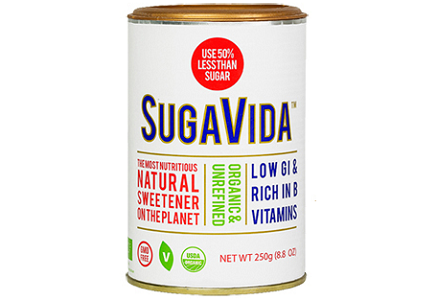 The quest for new natural alternatives to conventional table sugar continues to be a hot topic in the food and drinks space. This week Gama takes a look at one of the latest players on the scene – SugaVida Natural Sweetener.

Promoted as “the only sweetener that is a superfood”, SugaVida is a new brand of health-oriented natural sweetener from UK-based Conscious Food Ltdwhich is claimed to be “set to revolutionise the global food industry”. Chief among the product’s health claims is its B vitamin content – 1 tablespoon of the powder is claimed to provide 133% of the RDA of vitamin B12, 222% of the RDA of vitamin B6, and 664% of the RDA of vitamin B1. The ‘magic ingredient’ behind the product appears to be palmyra jaggery: extracted from the sap of the Palmyra Palm tree, it is described by Conscious Food as having a 6,000 year history of use in cuisine and Ayurvedic medicine in India.

SugaVida highlights the battle currently taking place for the hearts and minds of consumers in the natural sweetener space. As industry has latched on to demand for ‘all things natural’, the clear winner to date has been stevia  – since its approval as a food ingredient in North America and Europe sales have soared, with various estimates placing the value of the market in the hundreds of millions of dollars per annum and rising. Comparable in price to conventional sweeteners, but without the associated physiological side effects, stevia has been able to gain significant traction in a wide range of categories in both the food and drinks industries.

More recently, another pretender to the ‘natural sweetener’ crown has emerged in the shape of  monk fruit, a type of sub-tropical melon also known as luo han guo. Its greatest benefit was said to be its flavour, lacking the bitter aftertaste often associated with stevia and many other sweeteners. The promised monk fruit revolution has yet to materialise however, perhaps down to the limited viability of the plant as a large-scale commercial crop. Compared to its rivals, monk fruit remains an expensive option – pure monk fruit sweeteners generally priced well in excess of more conventional options.

Unlike either stevia or monk fruit, SugaVida does not claim to be low-calorie – although its 3.1 grams of fructose per 100g is said to compare favourably with other sugar alternatives such as coconut palm sugar, and thus make it suitable for low GI diets. Instead it competes more directly in the ‘natural sweetener’ space alongside products such as agave syrup and honey, which benefit from stronger health connotations than table sugar despite their comparable calorie content.

Whether or not SugaVida turns out to be the ‘revolutionary’ ingredient it claims to be, it is a further indication of the fragmentary nature of the natural sweetener market in the absence of a single ‘miracle’ product. As it stands, the trade off between supposed health benefits, ‘natural’ qualities, affordability, calorie content and flavour is likely to see the natural sweetener market sustain a strong diversity of players for some time to come.