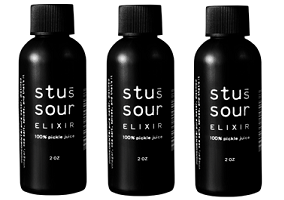 Promoted with the slogan “Gain power. Go sour”, Stu’s Sour Elixir from Stu’s Heritage Foods is a new vinegar-based product that is being advertised as an alternative to traditional sports drinks. Sold in a shot format and in almost industrial-style black packaging, the product exudes strength and masculinity, characteristics it emphasises through marketing copy such as “Sports drinks are weak. But Stu’s Pickle Juice? A force of nature”. Designed to be used to fight cramps or enhance endurance, it is described as a “potent post-workout electrolyte replacement” containing “100% pickle juice for 110% performance”.

The launch of Stu’s Sour Elixir comes at a time when vinegar is becoming a fashionable health drink in some western markets, partly as a result of new celebrity-endorsed dietary regimes. Vinegar, in particular the apple cider vinegar used in Stu’s Sour Elixir, is being lionized for its supposed functional benefits, from its apparent ability to regulate blood sugar levels to its support for digestive health.

The transition of vinegar from condiment to sports drink is one which owes a significant debt to coconut water, the success of which has opened up new opportunities for naturally-sourced ingredients in the sports drinks category. These ‘natural’ ingredients and benefits have proved a valuable means of attracting health and diet conscious consumers to the category – a target market defined by Stu’s Heritage Foods as “top athletes [that] treat their bodies like temples”. Underscoring its ‘natural’ virtues, Stu’s Sour Elixir is promoted as both “clean” and “pure”, based on a recipe of “4 simple ingredients: pure water, sea salt, apple cider vinegar and a blend of pickling spices”.

Away from health benefits, Stu’s Sour Elixir provides further evidence for another significant product trend – that of adventurous or even ‘extreme’ taste experiences based on sour, salty and spicy flavours. Rather than attempting to disguise its unconventional flavour, Stu’s Sour Elixir turns it into a virtue, relating the sour taste to qualities of potency and strength. As such it appeals to the inherent male desire for challenge and competition, where the ability to tolerate ‘extreme’ experiences is sometimes regarded as a signifier of masculinity.

By combining ‘power’-oriented marketing with ‘extreme’ flavours and bold but simple product claims, Stu’s Sour Elixir makes an interesting case for how natural functional drinks, which are often targeted at women, can be repositioned for a male audience. Eschewing the ‘light indulgence’ of female-oriented products and moving the focus to potency, simplicity, and intensity of experience, manufacturers can begin to reframe health drinks for male consumers, responding to their specific needs and preferences in the functional space.