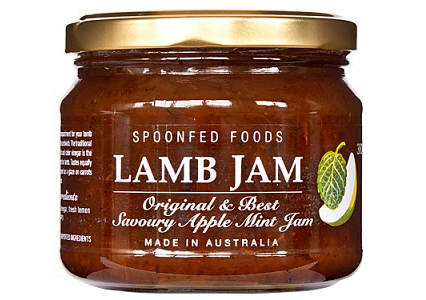 Reinventing jam for a younger generation of consumers is Gama’s innovation focus this week, as we take a look at a new line of sweet-meets-savoury preserves recently launched in Australia – Spoonfed Foods Savoury Jam.

A new line from deli foods company Spoonfed, Spoonfed Foods Savoury Jam is designed to attract younger consumers to the jam category through bold flavours and gourmet, ‘foodie’ positioning . Given names such as Lamb Jam, Ham Jam and Snag Jam, the range has been “created to perfectly accompany foods and deliver an extra flavour dimension” and comprises seven “specially created food condiments that are each designed to go with and balance particular savoury foods; their ‘partners’ ”. As Spoonfed is at pains to point out, its new line is not a chutney or a relish but a preserve “made just like jam” that features adventurous flavour combinations – such as apple jam with mint and rosemary and pineapple jam combined with Asian spices.

The challenge facing jam and preserve manufacturers such as Spoonfed is amply demonstrated by recent research. In 2013 Roy Morgan revealed that conventional jams were struggling to resonate with younger Australian consumers, finding that seniors were twice as likely to eat jam and honey products as young adults. The study discovered that, in the year to June 2013, 47% of consumers aged over 65 ate sweet spreads in an average seven-day period, compared to just 21% among the 14 to 24 age group.

Nor, indeed, is this generation gap restricted just to Australia: in 2012, the Telegraph reported that jam sales in the UK were also starting to decline, with the industry citing the category’s lack of appeal among younger consumers as one of the primary factors in the slump. It reported how the country’s largest retailer Tesco had responded by revamping its jam offer, launching cocktail and smoothie themed jams such as a Cosmopolitan Mocktail Preserve, as well as stocking more adventurous products such as Eat 17’s bacon jam, acknowledging, as with Spoonfed, that demand for savoury flavours in the category was increasing.

The Spoonfed Foods Savoury Jam range is an indication of how the jam category may need to continue to evolve in order to maintain its relevance and appeal, especially with regard to a younger audience. Recognising and responding to a need for bolder, more sophisticated flavours – in the case of Spoonfed “sweet, spicy, hot, earthy, fresh or sour tones” – as well as targeting changing patterns of use and consumption – such as wider use of products as ‘cooking ingredients’, driven by a greater desire among young people to experiment and express their individualism through food – could all be key to addressing the category’s image problems and, as a result, halting a potentially longer term decline in sales.