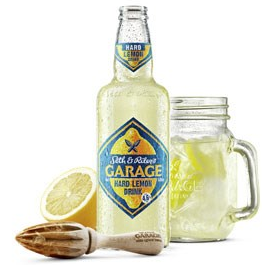 Launched by Carlsberg in a number of global markets, Seth & Riley’s is the latest in a recent swathe of ‘hard’ alcoholic fruit-based drinks that typically target men. Such drinks provide an alternative for male consumers dissuaded by the more typical fruit-flavoured FABs, particularly if they perceive them to be – directly or indirectly – excessively feminine in their positioning.

Overcoming this barrier has led some manufacturers towards an overtly ‘male’ branding strategy, such as the promotion of higher alcohol volumes, the choice of masculine pack design and the use of edgy marketing slogans. This is the route chosen by one of the most well-established  ‘hard’ fruit drink brands in the US – Mike’s Hard Lemonade. Featuring bold, black-themed pack designs and male-oriented imagery such as boxing gloves, it has an alcohol volume typically between 5 and 8% and makes use of straplines such as “Warning: Hard. And then some”.

In an effort to attract consumers who might be dissuaded by this type of ‘masculine’ marketing strategy, Seth and Riley’s takes a different tack. According to publicity material, the product is “mature and responsible” and is geared to “relaxed young people aged 25 and over [with] a strong sense of their own identity”. These messages are carried through with the product’s retro, ‘home-made’ feel, the emphasis on “natural fermentation” and "balanced bittersweet taste", and the use of traditional bottle design.

Seth and Riley’s is an indication of the diversity of what Carlsberg identifies as “transitional” drinkers. Their divergent preferences imply careful differentiation, with simple notions of masculinity not necessarily sufficient in engaging a broad audience.  FAB manufacturers may increasingly need to appeal to notions such as quality and authenticity in order to reach some of these maturing male consumers, who, as their preferences evolve, might otherwise divert to more ‘sophisticated’ categories such as craft beer.