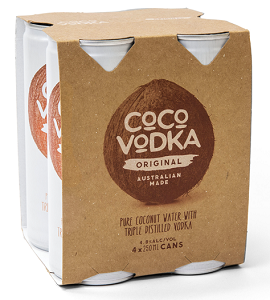 Launched in 2014 in Australia, Coco Vodka is a premixed spirit drink blending triple-distilled vodka and “the fresh water from young coconuts”. Available in an original version as well as varieties flavoured with pineapple and guava, the drink seeks to draw heavily on the ‘pure’ and ‘natural’ associations of both vodka and coconut water, boasting that the product contains “only a few ingredients, all you’ll recognise”. The ‘pure and natural’ theme is also evident in the choice of pack graphics and materials, with the unbleached kraft of the outer sleeve recalling the husk of a coconut (even if, ironically, coconut water is extracted from green rather than brown coconuts).

Purity aside, the ubiquity of coconut water in the innovation arena – as a beverage in its own right, as well as an ingredient or flavouring in other products – is testament, primarily, to its versatility. In the drinks space alone, it is able to compete in multiple categories: from its natural home in fruit juice, to bottled water, where its clear colour and light flavour make it an appealing alternative to mineral water; and finally, by virtue of its functional benefits, to categories such as health drinks: coconut water is often billed as ‘nature’s sport’s drink’.  As evidence of its continued rise, a website dedicated to coconut water in Australia predicts that the total number of brands available in the country could be set to top more than two dozen by the end of 2014.

As Coco Vodka amply demonstrates, however, coconut water does not only have relevance in soft drinks categories.  Despite the apparent contradiction between ‘good for you’ coconut water and ‘bad for you’ alcohol – something recognised by Coco Vodka itself with its self-consciously paradoxical slogan of “a little bit of bad, for those who want something good” – there is a clear affinity between a product such as coconut water and low-ABV alcoholic drinks. Given the boom in easy-to-drink products such as flavoured ciders and beer mixes, the light, refreshing properties and naturally sweet, fruity flavour profile of coconut water could make it an ideal choice for companies looking for the next breakthrough innovation in the lucrative summer drinks space.