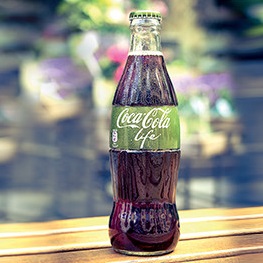 This week, Gama takes a closer look at the debut of Coca-Cola Life, a new lower-sugar version of the soft drink slated for launch in the UK this autumn.

Life is Coca-Cola’s first major UK brand launch since Coca-Cola Zero in 2006. Positioned as a “lower calorie” cola with 37% less sugar than regular Coca-Cola, Life is sweetened with a combination of standard sugar and the much in-vogue sweetener stevia. Green is the predominant pack colourway, presumably in a nod to stevia’s natural origins.

The launch of Coca-Cola Life has much to do with mounting pressure against the soft drinks industry over sugar levels, with sugary carbonates increasingly blamed for soaring obesity levels and ever more stringent regulation threatened against soft drink manufacturers. As Gama reported in November, Mexico, which has among the world’s highest obesity levels, is imposing new taxes on soft drinks in a bid to curb consumption, while action against so-called “supersize” soft drinks has been proposed in the UAE and similar measures were only narrowly overturned in the US in 2013. Coca Cola itself describes the launch as being a response to “changing lifestyle trends”.

From a formulation perspective, Coca-Cola Life can also be seen as Coca-Cola’s response to the success of Next, rival Pepsi’s own “mid-calorie” cola which was launched in 2012. Although the formulation varies from market to market, Pepsi Next typically contains 30% less sugar than regular Pepsi, and, while in the US is sweetened with high fructose corn syrup and Acesulfame K, in many other markets – including Canada, Australia, the Netherlands and France – contains a blend of sugar and stevia, the same as Coca-Cola Life. Through Next, Pepsi has successfully targeted drinkers of regular cola who are looking for lower-calorie alternatives but who do not like the taste profile of artificially sweetened products.

In the same way, Coca-Cola Life will be looking to capture consumers who, for various reasons, may be looking for an alternative to its own Coca-Cola, Coca-Cola Zero and Diet Coke brands. It will be hoping to emulate the success of the Zero brand, which identified a niche for calorie-conscious male consumers put off by the feminine marketing of Diet Coke. Coca-Cola Zero achieved £24.1 million in UK sales in the first 16 weeks of launch alone.

Coca-Cola’s record on major brand launches has been mixed, however. As the company has previously discovered to its cost, playing with a traditional and well-established formula can be a hazardous occupation: products such as Tab Clear of the early 90s and, notoriously, the “New Coke” of the mid 80s failed to resonate with consumers and were soon discontinued.

Whether Coca-Cola Life turns out to be the next Coca-Cola Zero – or the next “New Coke” – may have a significant bearing on the shape of the UK cola market in the years ahead.