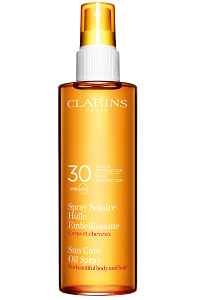 This week Gama casts its eye over the latest display of multifunctionality in the health and beauty industry – Clarins Sun Care Radiant Oil Spray.

Combining the benefits of a body oil, a hair oil and sunscreen in one, Clarins Sun Care Radiant Oil Spray is the latest addition to the Clarins line up of sun protection products in Europe. Described as “a beautifying oil enriched with a nourishing elixir”, it claims to “nourish” and “beautify” the skin and hair while also leaving a “captivating exotic fragrance” and offering SPF 30 sun protection.

The launch of Clarins Sun Care Radiant Oil Spray is a further example of the growing prominence of the “oil” trend in haircare, a trend that has seen hair oils begin to usurp traditional hair treatments, while oil-based formulas increasingly appear in categories including conditioners, styling products and colourants. This is a trend that has resonated with consumers – according to a report from the Telegraph, when L’Oreal Professionel introduced its Mythic Hair Oil in 2012 it became the brand’s fastest ever seller, with more than a million units purchased in its first months of launch.

Much of the success of hair oils can most likely be attributed to a key aspect of their positioning – unlike conventional hair treatments, hair oils may claim to actively “nourish” rather than simply “clean”, “treat” or “condition”. Typically based on plant, fruit or seed oils – in the case of Clarins a somewhat exotic blend of “organic nyamplung oil” combined with “extracts of gold cob, sycamore and aloe” – hair oils benefit from natural formulations that consumers may perceive to work in harmony with the natural properties of the hair. Then, beyond natural “nourishment”, many hair oils offer additional benefits such as enhanced protection, improved manageabliity or celebrity-endorsed styling.

Beyond haircare, however, Clarins Sun Care Radiant Oil Spray also succeeds in bridging the gap to traditional suncare. Although not the first hair oil to offer sun protection, its versatility as both a hair and body product looks to be a first among mainstream brands. By making a clear link between the hair oil trend and the classic 'tanning oil', Clarins could help revitalise and redefine oil-based suncare, reinforcing the idea of oil as a “natural” product that can “nourish” the body while offering tangible protection against the harmful effects of the sun.