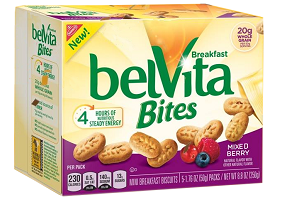 Exploring the recent craze for breakfast biscuits, and the move towards ‘snacking’ formats in the confectionery and bakery markets, this week’s innovation focus is a new launch that pulls together both the on-the-go breakfast and ‘bitesize’ trends – Bel Vita Bites Breakfast Biscuits.

Claimed to be a response to the “42% of Americans skipping breakfast due to being crunched for time”, Bel Vita Bites Breakfast Biscuits is the latest addition to Kraft’s Bel Vita range of breakfast foods, as the firm seeks to drive further growth in a category that has undergone a major boom in recent years. Launched in the US in 2012, having been initially rolled out in Europe, the Bel Vita brand has established a firm foothold in the US biscuits category and has spawned numerous imitators, with major cereal and bakery players such as Kellogg, Weetabix and Nature Valley all eager to tap into the 'breakfast biscuits' trend.

The newest member of the Bel Vita range, Bel Vita Bites are available in the same 50g packs as Bel Vita Breakfast Biscuits but come as numerous ‘bitesize’ mini biscuits, rather than as the established pack of four. Available in Chocolate and Mixed Berry varieties, Bel Vita Bites are claimed, like their larger cousins, to contain 20g of whole grain and 4g of fibre per 50g serving. Similarly, they are promoted as a satiating alternative to traditional breakfast products, offering “portability and poppability” and containing “slow-release carbs from wholesome grains to help fuel the body for four hours”.

Although Kraft is careful not to claim that Bel Vita Bites function as a complete meal in themselves – instead recommending that they “should be enjoyed with a serving of fruit and low-fat or non-fat dairy for a balanced breakfast” – the launch does indicate an increased blurring of the lines between ‘meals’ and ‘snacks’ in segments such as breakfast foods. Indeed, it can be seen in the context of wider moves towards ‘snacking’ and ‘sharing’, particularly in markets such as bakery and confectionery, where ‘bitesize’ foods sold in pouches, small tubs and similar formats have become an increasingly familiar sight on retail shelves.

More broadly, the launch of a breakfast food in a ‘snack’ format speaks of a wider truth about the increasing fragmentation of meal occasions in general, particularly among certain groups of time-pressed consumers. Moving away from the traditional concept of ‘three square meals’, these consumers are eating in smaller portions, more frequently and less regularly throughout the day. As strict notions of breakfast, lunch and dinner become eroded, manufacturers may find new opportunities within the ‘little and often’ eating habits that are increasingly defining meal occasions within modern consumer lifestyles.