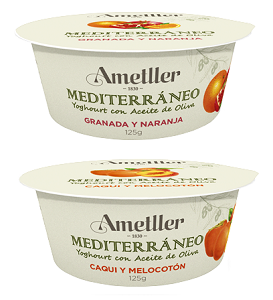 The growing influence of Mediterranean diets in the world of product innovation is brought into focus with the launch of Ametller Mediterranean Yoghurt with Olive Oil, a line which is new on the market in Spain.

This week, Gama once again turns the spotlight on the yoghurt category and, in particular, the influence of the ‘Mediterranean’ trend in new product development. Ametller Mediterranean Yoghurt with Olive Oil, launched by Barcelona-based Mamafresh, takes the theme very much to  heart – as its marketing material itself says, the aim is to capture the “intensity of flavour and freshness that evokes for us the essence of the Mediterranean”. This is apparent in the unusual flavour blends that take inspiration from fruits and herbs typically associated with southern Europe, including persimmon & peach and fig & thyme.

The real ‘Mediterranean’ point of interest in the launch, however, is the formula of the yoghurt itself. As the name suggests, olive oil is a key ingredient: according to the company, the oil is used to replace the saturated fat present in milk, creating a creamy texture and “unique flavour” without the addition of cream or other enriching ingredients.

The growing importance of ‘creaminess’ and indulgent texture in yoghurt is one that Gama has highlighted previously. While Greek yoghurt – itself the standout global example for the ‘Mediterranean’ phenomenon – has been the standard bearer, the trend has been expressed in numerous different ways, including aerated or ‘whipped’ textures and, as Gama has recently seen, dessert-inspired ideas such as Batavo Yogoflan.

Where Ametller may score highly, however, is that its product is not merely an expression of a Mediterranean style, as in the case of Greek yoghurt. Rather, the use of olive oil taps directly into the supposed health benefits of the Mediterranean diet – ‘natural’, high in ‘good fats’ and with a focus on fresh fruit and vegetable ingredients. While Greek yoghurt is unlikely to yield its position as the foremost ‘Mediterranean yoghurt’, ingredients such as olive oil shows how the ‘Mediterranean’ theme might further develop in the dairy market, inspiring new flavour ideas and helping producers bridge the challenging gap between health and indulgence.