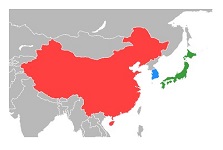 The number of online shoppers is continuing to grow in China, Taiwan and Korea, creating many opportunities for FMCG brands, a recent report has concluded.

In South Korea, e-commerce is now the third largest retail channel in FMCG, with 9% market share. In China and Taiwan, the market share stands at 1.8% and 3.2% respectively, and is expected to grow significantly.

However, according to Warc, behind the headline growth rates lies a more complex picture, with the e-commerce channel in these markets becoming increasingly fragmented and sophisticated. In China, it is young families who are most inclined towards e-commerce, while in South Korea and Taiwan it is the over 50s that represent the fastest growing market.

Meanwhile, the type of e-commerce activity also varies by demographic, according to the report. In South Korea, consumers aged 40-50 prefer departments store sites, while those in their 20s are opting for branded shops.

Among the other findings of the report from Kantar Worldpanel was the growing penetration of FMCG e-commerce in China, which has almost reached 30% in 2013. Biscuits and infant formula were among the fastest-growing categories, the report found.