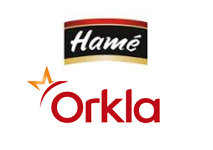 Norwegian firm Orkla has announced that it is acquiring Czech food manufacturer Hame for €175 million (£129 million).

In a statement, Orkla said that joining forces with Hame would allow it to double its turnover in Central Europe. In the Czech Republic and Slovakia, Hame holds leading positions in  pates, ready meals, ketchup, preserved vegetables, jams and baby food. Its brands include Hame, Majka, Znojmia, and Otma.

“The categories offered by Hamé are well-known to Orkla and will complement and strengthen our existing categories. With this transaction Orkla becomes one of the leading FMCG players in attractive markets in Central Europe”, said Orkla’s president and CEO Peter Ruzicka.

Orkla also own other assets in central Europe, such as Felix in Austria and Orkla Foods Romania

“With Vitana and Hamé, Orkla becomes an attractive supplier to the grocery trade in the Czech Republic and Slovakia, and the transaction will also strengthen our operations in Romania. A stronger foothold in Central Europe will ensure that Orkla is well positioned for further growth in these markets”, added Atle Vidar Nagel-Johansen, Orkla EVP and CEO of Orkla Foods.