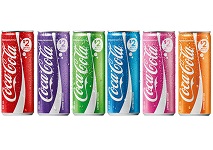 In an extension to its recently-launched 250ml format, Coca Cola has unveiled a range of brightly-coloured  pack designs for the summer season in Australia.

The range, launched with the hashtag #colouryoursummer, is available in a choice of vibrant hues ranging from green and blue to pink, purple and orange. The new packs are the first design change for the Coca Cola brand in Australia since the “Share a Coke” campaign.

“The #colouryoursummer campaign is one of the most innovative and disruptive campaigns that we have ever undertaken, we know that people love to express their individuality and we believe that the five limited edition colours will increase the desirability of our 250ml slimline Coke and Coke Zero cans”, said Antoinette Tyrrell, Marketing Manager Coca-Cola South Pacific.

Starting in November, the  #colouryoursummer campaign is said to feature pop up can installations, OOH panels dispensing drinks, painted murals, video content, and “digital spectaculars” that transform into interactive games.

Coca Cola’s 250ml can was originally launched in August of this year. The five new coloured designs have been made available nationwide from November 2014 at a maximum price of A$2 ($1.68).