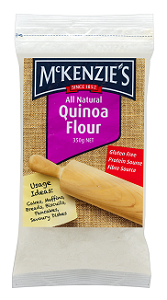 Ward McKenzie (McKenzie's), an Australia-based producer of staple foods including pulses and legumes, seasonings and cereals, has announced the launch of more than 10 new store cupboard items as it looks to expand its range.

Among items already launched are coconut and quinoa flours, suitable for both sweet and savoury dishes,  that the company says  contain “nothing but 100 per cent pure coconut flour and 100 per cent natural milled quinoa grain respectively”. From mid-September, McKenzie's is also launching gluten-free lentil, chickpea, corn and banana flours.

In the pulses and legumes category, yellow lentils and black beans are now being offered, while coloured quinoa products - white, black, red and tri-colour - are being unveiled as "fantastic additions to salads, biscuits or as rice substitutes”.

Finally, the company's baking goods range is being extended with the launch of ready-to-roll marzipan and toasted coconut chips.